In Model Driven Development: The Basics (Part I) we have set up an environment for modeling a system with Enterprise Architect and for generating C++ code to be compilable in Visual Studio.

In this second part of the post we are going to build on that and see how some fundamental entitites in UML are translated into C++. This should give the readers enough experience to play with the basics of MDD and be able to find more advanced features themselves. For brevity I am not going to describe in detail how to access features which have already been described in Part I.

1. Add an Attribute to the Logger Class

The objective of this activity is to put in the Logger class an element which records the current required level of tracing. As usual, we want to use UML while keeping in mind that we want the tools to generate valid C++ source code from that. 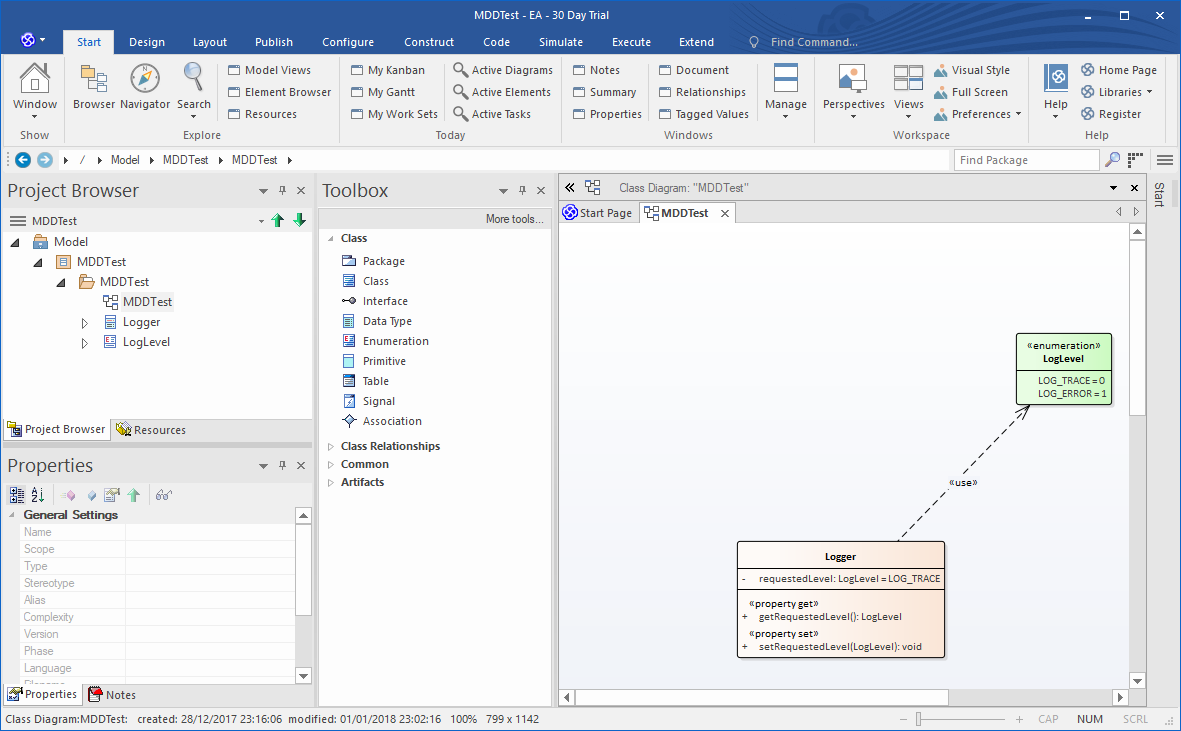 Fig, 3 Model after introducing the “use” dependency

2. Add a method to the Logger Class

Now we want to add a method that logs the messages on the screen. It will take two parameters, the LogLevel for which the message has to be shown and the message itself. It returns nothing.

As previuosly noted, we are using C++ but not its standard library, only the much more basic C language standard library, because we pretend to be working in an embedded environment and our tools are geared towards it. Also, function security and anything related to potential vulnerabilities are out of scope here.

EDIT 2018/01/08 : A reply to a specific question to LieberLieber Software, the developer of Embedded Engineer, has confirmed that from version 2.1 of the plug-in it is also possible to generate include directives for the C++ Standard Library. I have tested the feature and I can confirm that (please se also below).

As we have seen, it takes very little time to master the basics and use Model Driven Development. What we have shown here constitutes the bulk of the work in modeling. I believe that we can’t overhestimate the importance of concentrating on designing a system.

Next post will be on how to deal with legacy code.

This work is licensed under a Creative Commons Attribution-NonCommercial-NoDerivatives 4.0 International License.

I am not related to Sparx, but they kindly granted to me a license to create UML diagrams on this website